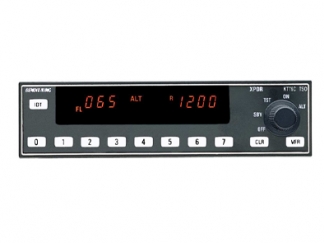 The Bendix/King 76C transponder is a radio transmitter/receiver which operates on radar frequencies.

Receiving ground radar interrogations at 1030 MHz, it returns a coded response of pulses to ground based radar-or airborne TCAS receivers-on a frequency of 1090 MHz.

As with other Mode A/Mode C transponders, the KT 76C replies with one of 4,096 codes, which differ in the position and number of pulses transmitted. By \"replying\" to interrogations, your KT 76C enables ATC and TCAS computers to display your aircraft\'s identification, altitude and ground speed on display screens. When the IDENT button is pressed, your aircraft will be positively identified to Air Traffic Control.

To ensure the visibility of your aircraft, both now and in the foreseeable future, we built the KT 76C to pass the rigorous Highly Accelerated Lifecycle Testing (HALT) program, subjecting it to rapid extremes of temperature, vibration and G-loading. Whatever your flying regimen, the KT 76C has already been there and demonstrated it will keep working.